What is Martial Science?

Martial Science is the accumulated knowledge and principles behind the performance of the Martial Arts. It informs movement, strategy, the generation of power and how and where to attack. It includes but is not limited to the sciences of: joint manipulation (Tuite-jutsu ), pressure/vital points (Kyusho-jutsu), proper angles and footwork, body types, the energetic system of the body including Ki Theory, Yin Yang Theory, Five Element Theory, meridians, etc..

Both Master of the IMSF, Hanshi Luis Morales and Shihan Rusty McCains, have decades of in depth study in the Martial Arts and Hanshi Luis Morales is also the North American Representative of Grand Master Tetsuhiro Hokama who is recognized as the foremost expert on the Bubishi in the world. 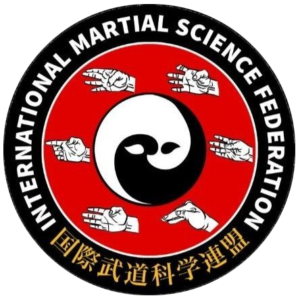 The mission of the IMSF is to support and guide its worldwide members in advancing their martial and life protection skills by offering access to Martial Science and Bubishi Knowledge-based resources and realistic training methods that will enhance and expand their current abilities.

The International Martial Science Federation™ (IMSF) is unlike other martial art based systems in that the IMSF is multi-faceted. The IMSF is open to all styles and levels of practice. The IMSF is comprised of highly skilled martial artists from various schools of study, law enforcement and personal protection personnel, medical and scientific professionals; all of whom are committed to continual scrutiny, research and development. The Martial Science and Bubishi Knowledge of the IMSF provide practitioners with skills and training not commonly found in most existing martial art styles or personal protection systems.
The IMSF provides group training sessions and workshops throughout the world as well as ‘in-house” training by qualified and vetted instructors. IMSF instructors are not only experts in this specialized field of study, they are heavily cross-trained in various martial systems. This allows IMSF instructors to provide personal and direct training to those interested individuals and groups seeking refinement of their current practices.

How is the IMSF Different?

“Vital Point” study became a major bandwagon that many jumped on in the early 1980s. The number of “experts” and organizations popped up like weeds but dwindled rapidly over the next couple of decades leaving a handful of qualified proponents. Even within these few remaining organizations, a greater percentage are not designed to readily apply their system to the practitioner’s base art. We all know how much time is required to properly manage one system, let alone two. Therein lies part of the problem.
In the beginning, most of these organizations had the good intention of benefitting the martial arts general public through open sharing of information, accessible and affordable clinics, continued studies, and other training resources. These good intentions soon began to be replaced with egos and placing individual promotion over the benefit of the organization and its members. This is not uncommon and one of the reasons why so many martial artists avoid such organizations.

Although modern Western science has proven the physical existence of meridians and “pressure points”, an honest connection between these sciences and the origins of the martial arts was missing. Due to the drastic changes imposed on modern martial arts over the last 150 years, even the most gifted martial artists have experienced difficulty in successfully marrying the “new” with the “old”.
This was witnessed over and over again by Hanshi Luis Morales and Shihan Rusty McMains as they separately taught clinics throughout North America over the last 25 years. It made it difficult to establish lasting relationships due to these concerns. Despite it all, several schools in the US and Canada began to study in depth with either Hanshi Morales or Shihan McMains. Their reasons were based not only on the extensive knowledge and abilities of either instructor but on their deep sense of integrity as well.

In 2005, Hanshi Morales created the “Bugaku Renmei” (international martial science federation) in an effort to fill in the gaps left by some of these organizations. Based largely on the needs and desires of students and understanding, the need for a proper organization designed to benefit its members first, the “Renmei” was relaunched as the IMSF.

The IMSF is headed by Hanshi Luis Morales and Shihan Rusty McMains. Hanshi Morales and McMains have a combined 90 years of martial arts training with a combined 55 years of specialized study in martial sciences and are two leading experts in this field.

Get our special offer to get started!